Blind Dog Gets Trapped in Window Well In The Bitter...

Sitting in her basement, Emily Raguse saw something in her window well. To her surprise, she found a 13-year-old blind dog huddling in the well.

The dog felt trapped and curled up. Seeing that he appeared covered in snow, Raguse ran to call her neighbor. Concerned, her neighbor called the police. Raguse went to check on the dog. She says he only moved his head a tiny bit. Because he shivered a lot, she grabbed a towel and covered him up. 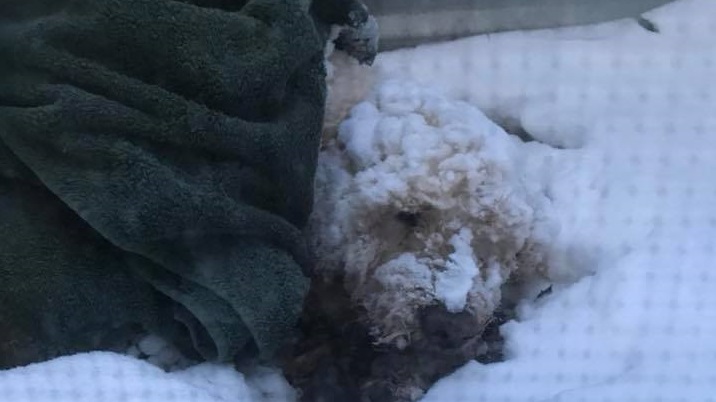 Being out of town all weekend, Raguse said she had no idea how long the dog was there for. Upon police arrival, they saw on his tag his name read “Buddy.” Police called the owner of Buddy.

Patty Sumpter, his owner, said she let the dog outside on Wednesday.

“Normally he goes down in the woods and he comes back,” she said. “And he didn’t come back. And I kept calling and calling.”

Sumpter called for Buddy all evening and looked for him all day on Thursday.

After she saw the snow, she felt hopeless. To her surprise, Buddy got stuck in the window well. Since he was close to home, Sumpter says he probably heard her but could not get out. Sadly, Buddy has no eyesight and battles cancer. Shockingly, he still survived five nights in the freezing cold. Sumpter said her 13-year-old Buddy is blind and battling cancer. Still, he somehow made it through five nights of bitter cold.

Sumpter feels so lucky to have Buddy back. Share if you feel just as happy for the two!